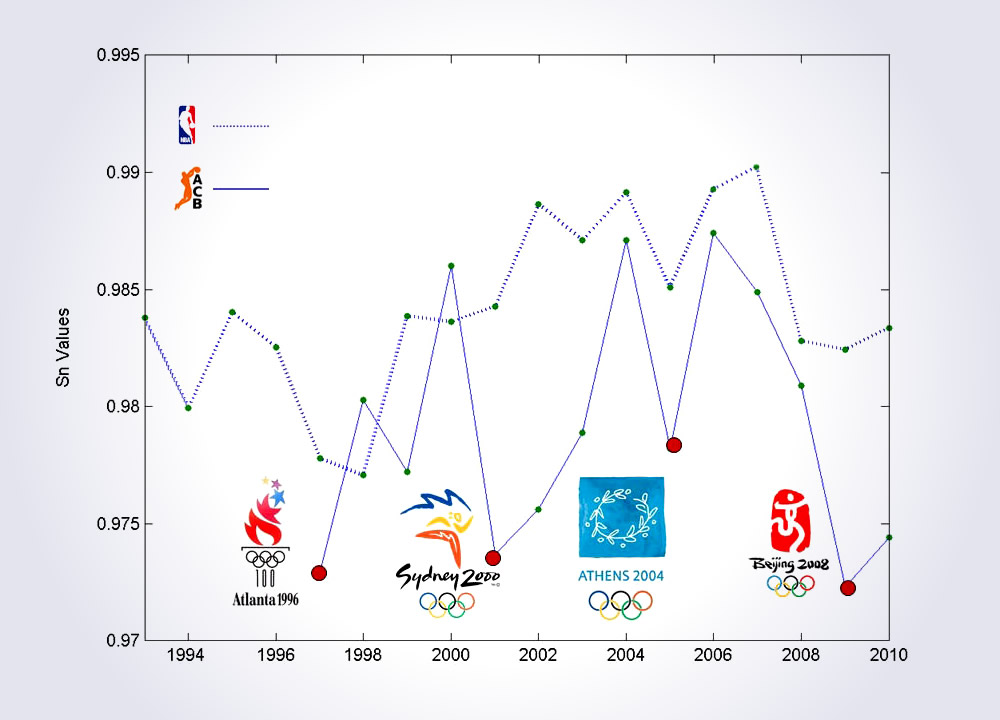 The competition between NBA teams is more constant throughout the seasons in Endesa, which also falls after each edition of the Olympic Games League.

According to a study by the University of Las Palmas, the differences may be due to economic and organizational reasons: the NBA there is only one division, there is a salary cap and the weaker teams have access to good players.

The fact that the NBA is a closed league without promotions or demotions as in Spanish, can be one of the factors that explain this behavior. “The ACB is open and less powerful computers less competitive globality” says Juan Manuel Martin, Department of Physics and member of the team that analyzed the results of the two leagues.

The authors also highlight the major budgetary differences of Spanish clubs, high economic dependence in some cases with public institutions and the high volatility of their workforces as other possible causes besides that some have several -Basketball sections, football and handball by example and not every year equally distributed resources.

“But what really draws attention in the Spanish league, and although desconozcamos causes, is that a decline in competitiveness every four years, just after the celebration of the Olympic Games occurs,” notes Martin.

The business model is NBA franchise type, where each team has rights over players. The operation of the salary cap and the draft -sorteo in which weak teams in a season are the first to choose from the following candidates from American universities and foreign- leagues requires each franchise to study what to choose and what to shield players economically.

NBA imposes measures to prevent only teams with great benefits can sign the best players.

We use our own and third-party cookies for the proper functioning of the web portal and its accessories, in addition to performing navigation analytics. Get more information about this technology by visiting our cookie policy

This website uses cookies so that we can provide you with the best user experience possible. Cookie information is stored in your browser and performs functions such as recognising you when you return to our website and helping our team to understand which sections of the website you find most interesting and useful.

Strictly Necessary Cookie should be enabled at all times so that we can save your preferences for cookie settings.

If you disable this cookie, we will not be able to save your preferences. This means that every time you visit this website you will need to enable or disable cookies again.

This website uses Google Analytics to collect anonymous information such as the number of visitors to the site, and the most popular pages.

Please enable Strictly Necessary Cookies first so that we can save your preferences!